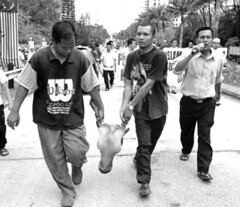 All patriotic Malaysians must condemn in the strongest possible terms the completely sacrilegious incident in Shah Alam in which a severed cow head was stomped and spat on by a group of protestors opposed to the relocation of a temple into their area.

In the incident that shocked the whole country, some 50 residents purporting to be members of the Section 23 residents association in Shah Alam carried out a rowdy protest outside the state government premises on 28 August, where they brought along a severed cow head and proceeded to stomp and spit on it.

The group was unhappy that an Indian temple would be relocated from Section 19 to their predominantly Malay-Muslim neighbourhood, particularly as the new location was near a mosque and a children’s playground.

“If this act of religious insensitivity, insult and offence had been committed against Islam, Utusan Malaysia would have gone to town not only with full frontpage coverage and denunciation, and probably half the newspaper today would be devoted to it. So, why the thundering silence from Utusan Malaysia?” asked MP for Ipoh Timur Lim Kit Siang.

Lim stressed that in other multi-religious societies, such a despicable act would have led to mayhem, riots and possibly loss of lives, and it bespeaks of the high degree of maturity, mutual tolerance, goodwill and co-existence that cool heads prevailed and nothing untoward happened in retaliation.

“In a multi-religious society, the act of sacrilege towards one religion must be regarded as an act of sacrilege to all other religions and the entire nation. Let this serve as a overarching consensus of all political parties, mass media, NGOs and Malaysians if we cherish and love this nation,” he added.

While he praised the Prime Minister for his quick response in ordering th IGP to take action against those responsible for the deplorable act, Lim expressed disappointment at the slow response shown by the police, citing that tardiness in dealing with “national security threats” had never been a weakness of the force.

He lashed out at the police for possessing “obsolete intelligence” to the point that they were not aware that an act of sacrilege was being carried out, whereas the organisers had made sure they got maximum media coverage. The video has since been uploaded to YouTube.

It is worrying that despite Najib’s 1Malaysia policy serving as an overarching inclusive policy to build a united nation of diverse races, religions, languages and cultures, recent trends have worked in the reverse.

“We have seen various political leaders and the mass media acting with utter impunity and immunity, by cranking up racial and religious animosities to polarize the country along race and religious lines – especially during the recent Permatang Pasir by-election . This makes a total mockery and repudiation of Najib’s “1Malaysia” concept,” said a worried Lim.

“These divisive, polarizing, centrifugal forces emanating from the top must stop if Najib’s 1Malaysia slogan is not to meet an even quicker end of all Prime Ministerial mottos – including Datuk Seri Abdullah Ahmad Badawi’s short-lived ‘Islam Hadhari’,” concluded Lim.

Meanwhile, MP for Klang Charles Santiago said that he was stumped by the police’s inaction.

“One protestor is reported to have challenged the state government to go ahead with the relocation, warning that it would guarantee bloodshed and racial tension. … I am stumped as to what else the state police chief is waiting for, given that opposition politicians are quickly nabbed for what is alleged as statements that could threaten national security,” Santiago said in a press statement.

He added that it had cast a pall on the Merdeka Day celebrations, lamenting, “In reality, we would be celebrating a Black Merdeka not just because of Friday’s protest but due to the ongoing clampdown on dissent, smear campaign against the opposition politicians, appalling coup staged to overthrow the Perak state government, efforts underway to topple the Selangor state government, death of Teoh Beng Hock while in the custody of anti-graft officers, rising curb on the freedom of expression and media and rampant corruption.” -The Rocket

This article was written by admin on Friday, October 16, 2009 at 3:59 pm. You can follow any responses to this entry through the RSS feed. Both comments and pings are currently closed.