Recently, the Audit Bureau of Circulation (ABC) of Malaysia released the half yearly circulation figures as at 31 December 2009 for most major daily newspapers, or colloquially known as the mainstream media (MSM) papers. The omens are certainly disconcerting for many of these MSM paper owners. The traditional mainstays of the English and Bahasa Malaysia dailies i.e. the Star, New Strait Times (NST), Utusan Malaysia (UM) and Berita Harian (BH) all recording drops in their circulation figures, with BH and its weekend edition Berita Minggu recording a staggering 24 and 31 percent drop from 2006 to 2009 respectively.
For some, it is a sign of times when the grand dame of MSM papers in Malaysia, the NST, was noted to have commanded less than 90,000 copies daily for those copies sold at full rates, well below most major vernacular dailies. Only Sin Chew Daily (SCD) bucked the trend, when it recorded an 18 percent increase over the same time period.
However, the tabloid-like dailies such as Kosmo and Harian Metro, which offer sensational headline news and sex laced fares, have chalked up impressive surges in circulation rates of 71 and 44 percent respectively. Is this a sign that the general public’s intellect has been reduced so visibly or is it more a question of reading as a form of escapism and cheap entertainment?
Yet in the same vein, the free and independent minded paper, the Sun, which regularly gives critical views of the government’s policies, has actually increased 73 percent. What are we to make out of these figures?
Growing distrust
The fact is the reading public’s aversion towards MSM paper’s reporting views has been growing. A Merdeka Centre survey conducted in November 2009 shows that the public overwhelmingly (74 percent) believes that the MSM papers are biased towards Barisan Nasional (BN). The same survey shows that the 48 percent of the public believes that the MSM are biased when reporting large scale corruption.
The catalyst for the slide in the MSM papers’ circulations was the result of the events of 1998 and 1999, the period of Anwar Ibrahim’s beating and his infamous sodomy trial. His political opponents had hypothesised that by injecting a massive overdose of negative news about him, Anwar’s political future would be over. However, the opposite transpired. The extremely lop-sided and sordidly inappropriate coverage of the trial proceedings offended many a reader’s sensitivity.
It resulted in public revulsion of the Mahathir administration and spawned the “Reformasi” movement. Buts its more visible effect, especially from a financial perspective, was on the MSM papers. The MSM papers aligned or owned by UMNO such as NST, BH and UM saw huge drops in circulation figures. The main beneficiary from this public relations debacle was Harakah, the PAS party organ, which saw its circulation shoot up to more than 400,000 copies in the months before the 1999 general elections.
By restricting opposing viewpoints and news from independent media through the Printing Presses and Publications Act (PPPA) and giving the BN-owned media a free rein to dominate the news wave, the powers that be have created an environment where the public’s distrust of MSM papers has only increased.
Another important trend was the spectacular growth of the blossoming Internet news and information websites. People were willing to read and believe anything alternative to what the MSM spins. Today, Internet based news media have gained respectability that was once the province of the MSM newsprint.
Fatal association
At the root of the MSM papers decline is the perceived interference by their political masters. Indeed for some papers, the association with any political parties can be a kiss of death. Nanyang Siang Pau (NSP) is a good example of this hazardous relationship.
NSP was a thriving Chinese language daily commanding a daily circulation of more than 150,000 copies and with a healthy balance sheet when it was taken over by the MCA owned Huaren Holdings Bhd in 2001. Almost overnight, it lost credibility and readership with the Chinese community. Its last publicly available circulation figures stood at slightly over 114,000 copies, and it has not submitted any circulation numbers since 2007. It was finally sold to Tan Sri Tiong Hiew King, the owner of Sin Chew Daily in 2006, and it is suffering a slow death at the hands of its former competitor.
With direct political ownership comes interference in presenting truths and untruths for the MSM papers. Post March 2008, this trend of interference took another turn for the worse as the MSM papers were used to attack the opposition parties, especially through the Malay dailies of UM and BH. UM is now being used regularly to stoke and incite racial sentiments amongst the Malay community in order to shore up support for UMNO.
The backlash against this perceived political meddling is not confined to falling readership alone. A few brave souls have begun to question on this. The recent public outburst of the UM writer who is the new National Union of Journalists (NUJ) president Hata Wahari against Perkasa’s undue influence on UM has certainly riled up some in UMNO, but has also won public applaud which is a rare phenomenon in the last few years for UM’s journalists. Will this trend continue?
Perhaps this conundrum for the MSM papers will not subside until a new government is installed and a freer flow of information is allowed in this country. -The Rocket 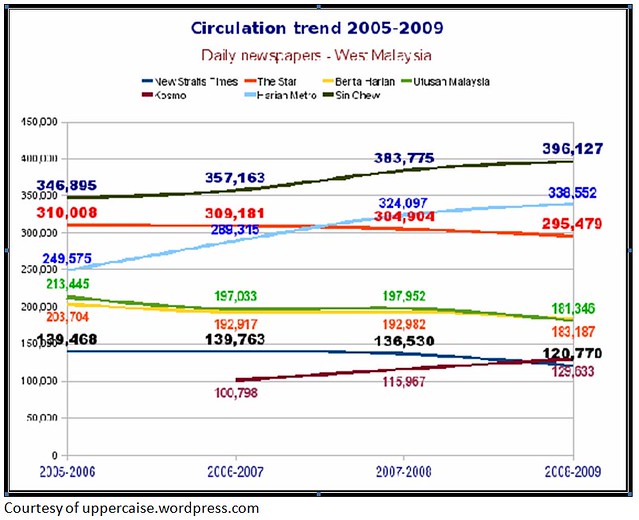 This article was written by admin on Wednesday, November 3, 2010 at 11:26 am. You can follow any responses to this entry through the RSS feed. Both comments and pings are currently closed.