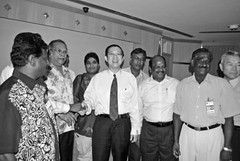 Penang Chief Minister Lim Guan Eng said he was prepared to have a nationally televised debate with Gerakan president Tan Sri Dr. Koh Tsu Koon anytime, anyplace, anywhere – without any ‘buts’ – even at the Gerakan headquarters.

Lim said he was very disappointed that Koh wanted to set pre-conditions before such as televised debate can take place.

On 30 August, Koh had said that Gerakan leaders were willing to debate with Lim on the Kampung Buah Pala issue. In an immediate response, Lim said that he would accept Koh’s challenge, but only if Koh himself debated with Lim. Instead, Koh sent Gerakan Youth leaders as his proxies.

“The pre-conditions Koh placed for the debate gives the impression that Koh has no sincerity at all to debate me. All this clearly shows that Koh’s indecisiveness and evasiveness has not changed at all, even after the 308 political tsunami,” remarked Lim.

Chiding Koh for his indecisive nature which resulted in the latter losing more than 10,000 votes during the 2008 General Election, Lim wondered how Koh tolerated UMNO’s corruption and political dominance for so long.

“Koh should explain his double standards and inconsistency in fighting corruption when he can support BN leaders who are associated with corruption,” said Lim, in an obvious reference to the BN candidate for Bagan Pinang, Isa Samad, who was suspended for money politics in UMNO and described as ‘unsuitable’ by former Prime Minister Tun Dr. Mahathir Mohamad.

Only Federal Government has say on heritage sites

In his statement on 24 September, the MP for Bagan clarified that only the federal government has the right to designate any site as a heritage site as provided for under the National Heritage Act 2005.

“By this, it means that the Heritage Commissioner under the Minister of Information, Communications, and Culture Minister, Datuk Seri Rais Yatim, can declare any site a heritage site under Section 24,” said Lim.
Previously, the State Legal Advisor, Datuk Faiza binti Zulkifli and the Penang Town and Country Planning Department had revealed that unlike other states (such as Malacca) in Malaysia, Penang possesses no heritage laws. Therefore, the state has to refer to the National Heritage Act, which is a federal law.

This means that the federal government, not the Penang state establishment, is the sole legal entity empowered to operate under such an act. By pointing to the DAP for its “inability” to designate the village as a heritage site, Gerakan was, in fact, trying to shift the blame toward the state government for its own misdeeds during its rule.

It should also be noted that the state government has no power whatsoever over the police, which is directly under the federal government. Throughout the issue, any police actions against the villagers are not within the jurisdiction of the state authorities.

“BN, Gerakan or its allies conveniently close their eyes to the fact that the police have lodged reports against and investigated my political secretary and state assemblyman for Komtar, YB Ng Wei Aik, for protecting the rights of the Kampung Buah Pala residents to demonstrate against my government and defying police orders on 30 June 2009 in Komtar,” added the DAP secretary-general.

Deprived of any power to alter the process through lawful means, the state government was incapable of halting the transfer of the land, which was approved by the then BN administration. – The Rocket

This article was written by admin on Friday, November 6, 2009 at 3:00 pm. You can follow any responses to this entry through the RSS feed. Both comments and pings are currently closed.