“He loves politics, but he loves his family too.” – Lim Hui Ying

As the youngest daughter in the family and self-confessed apple of her father’s eyes, Hui Ying shares personal insights on her doting father.

Impression of my father

“From young, I realised that my father was someone always on the move and was occupied with his work. My family got used to him not being around to do the things that a typical family would enjoy such as shopping or having regular dinners together. We didn’t complain. We learnt to be independent as a result.”

Still, the two share a close father-daugher bond, Hui Ying calls her father her most loyal listener. Even during breakfasts when he was rushing off to work, father and daughter would have lively discussions on any subject, with the elder Lim always listening attentively and rarely giving suggestions.

“As a child, whenever I got into any fights with my siblings or hurt myself, the person I would turn to was him. When I fell down, my mother would reprimand me for being careless but he would always comfort me. He would often tell me that our hearts have to be like a big vessel, able to withstand the many trials and tribulations of life.”

Describing her father’s habit of daily phone calls home, Hui Ying says he rarely missed the routine unless unusual circumstances keep him away. Even when he was travelling, he would always call her mother to find out if the children were safe and sound, rarely chatting about much else.

Family and politics
“My father loves politics, but he loves his family as well. During the 1970s, when we were having our school holidays he would often bring us along on his outstation trips. It was his way of spending time with us. I remember the time when we were in Cameron Highlands when he was meeting party members for some events, we were allowed to play and have fun. I guessed he was trying to maximise his time to be with us.”

When Parliament was in session, Kit Siang, by now an MP, would often bring his family to Kuala Lumpur. They stayed at the DAP Petaling Jaya headquarter office, sleeping on the floor. “My father lives a simple life,” says Hui Ying, “He isn’t particular about lodging or food. He was able to sleet well wherever he stayed. In fact I think he has learnt the art of speed-sleeping; why, he could even fall asleep within minutes!”

Hui Ying recalls memories of her father working from their then home in Melaka, laboriously typing articles and press releases for the media. The rattling sound of his typewriter would fill the neighbourhood, his furious typing speed earning the description of “machine-gun-like” from neighbours. Then a Form 3 student, she would dutifully await her fathers’ articles and deliver them by motorcycle to the local media office when he was done. 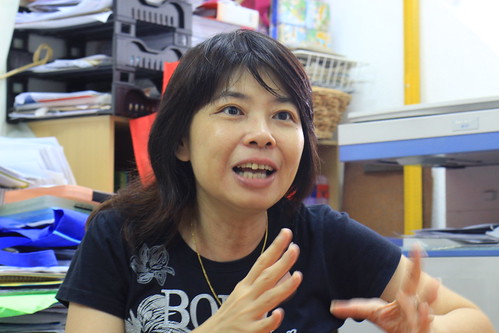 “As Kit Siang’s daughter, it is hard to say no to politics. The womenfolk in the family generally support my father and brother from behind the scenes.” Hui Ying admits she was reluctant when her father first approached her to consider joining politics after she graduated from university. However, after her father lost his parliamentary seat in the 1999 general elections, she decided to support him more tangibly by joining politics.

“I remember when he lost in 1999, I was feeling crushed and disappointed with the result. Yet he was remarkably calm. In fact, he was sadder in 1995 when DAP lost 13 state seats in Penang. I realised that he places the party’s well being above his own.”

Lowest moments
When her father and brother Guan Eng were detained under ISA in Kamunting detention centre in 1987, Hui Ying was 25.
“I was worried for them, I felt helpless as I could not do anything for them. My mother was affected badly; she was very depressed. The worse moment for my father came when my brother Guan Eng was jailed in 1998 for allegedly defaming the Melaka Chief Minister. Although he did

not say so, we felt he blamed himself for not being able to save his son. Days before the court sentence was pronounced, we kept asking him to join us for dinner. He refused many times. Finally we managed to convince him to join us for a family dinner. He left home hurriedly after we were done with dinner.”

Birthday wish
After a lifetime of working at a frenetic pace, Hui Ying hopes that he will slow down a little and take better care of his health. She also shares his dream for Malaysia to be a more democratic society and that the two-party system will take place in Malaysia during in his lifetime.

“He has great faith in himself. We are very honoured to be his children. I will always support him in his pursuits and sacrifices for Malaysia.” -The Rocket

This article was written by admin on Friday, February 25, 2011 at 6:41 pm. You can follow any responses to this entry through the RSS feed. Both comments and pings are currently closed.