Describing her father as a simple man with simple needs, Hui Ming says he cares little for money, as long as the family’s needs are taken of. Above all else, he values education, and firmly believes in the power of knowledge. An avid reader, Kit Siang would often bring the children to bookstores, infecting them with his own love of books.

Hui Ming grew up in Batu Pahat, her father’s own hometown. She remembers him frequently being away for party and political matters. But whenever he was home, he would spend as much time with them as possible. When they moved to Melaka, Hui Ming says her father was able to spend more time with the family. He was the one who taught the children to ride a bicycle, use the typewriter, and ride a motorcycle, she recalls fondly.

Now a proud and doting grandfather, Kit Siang is said to have a way with children. Hui Ming observed that crying babes often quieten down in his arms. He used to enjoy spending time looking after his grandchildren in Penang in the 1990s. Family values are important to him, Hui Ming says. He strove to create a closely-knit family, with each member being mentally strong. He believes a strong family will be able to endure the challenges it faces. The persecutions that her father faced in his political career drew the Lim family closer together, says Hui Ming, now a lawyer. “Our thoughts were always on our father and mother. When anything happens to my father, we would always think how it would affect our mother.”

“My father is a very private person. He doesn’t bring politics into the family. He seldom shares his worries at work with us. I wished he had done that more often so that we could share with his concerns”.

However, Hui Ying says he always kept the family informed about his whereabouts, and would never miss the nightly phone call home to her mother. “During Operasi Lalang, my brother Guan Eng was the one of the first to be detained under ISA. My father called to inform us about the arrest. He assured us that he would update us once he had news. Unfortunately he didn’t manage to get back to us because later that day he was himself detained.”

“The detentions of my father and brother under ISA during Operation Lalang were particularly hard on our family. My mother and sister would travel from Melaka to meet me in Kuala Lumpur and from there I would drive them to the Kamunting Detention Centre in Perak every weekend for 18 months. This was probably the highlight of the week for my father and brother. It was very exhausting for us physically and emotionally.  When my brother was jailed under the Sedition Act in 1998, we were heartbroken to see Guan Eng getting thinner and having health problems while serving the sentence.

Another trying time was when my father lost his parliamentary seat in 1999. He was devastated by the loss as he had been a Member of Parliament for 30 years. It hurt him badly to lose the job he had being doing for almost all his life.”

Despite the trials and tribulations her father endured, Hui Ming says he is a very forgiving person. “Our family has suffered a lot under the past regime, with two of my family members being imprisoned under ISA and my elder brother being jailed under trumped-up charges. Yet he bore no grudges against Tun Mahathir. For him, it was just part and parcel of politics and work.” 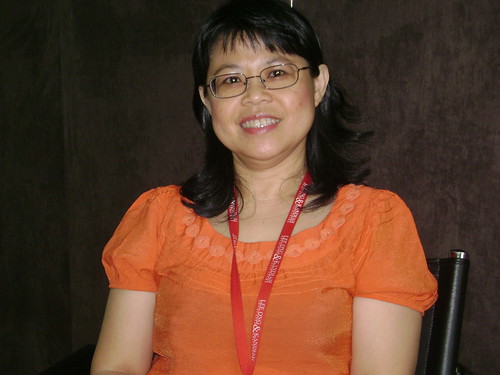 Hui Ming says it was her father’s focus and mental strength that kept him persevering in the face of adversity. Even when he lost his freedom due to detention, he kept his never-give-up attitude and remained at the forefront of fighting for justice and equality in Malaysia. “He always told us nothing stays the same and that situations would change for the better”

Kit Siang could never stand injustice, especially for the helpless and down-trodden, his daughter says. “When we were at home people would always call him asking for help; our house was always visited by people asking for his advice. He was a servant to the people at heart. Contrary to the picture of a tyrant often painted of him by the press, he is a friendly and approachable man.”

“He is always supportive of what we do, encouraging us to pursue our dreams.” Hui Ming credits her father as a tremendous impact in her life and a role model. “He taught me to be strong mentally and emotionally, to never give up and be humble. My father’s a great dad!” -The Rocket

This article was written by admin on Friday, February 25, 2011 at 6:44 pm. You can follow any responses to this entry through the RSS feed. Both comments and pings are currently closed.