Stepping Up to Be Counted – Christina Chew 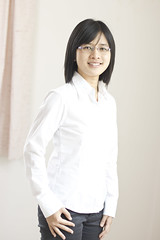 Fresh face Christina Chiew may only be 26 years old but she already feels strongly about the need for real and lasting change in her beloved home state of Sarawak. This young lady who hails from the bustling town of Sibu has lived in the state capital Kuching for the last six years after attending UNIMAS (Universiti Malaysia Sarawak) in Kota Semarahan.

When she first graduated in 2007, she worked as a research assistant at UNIMAS in 2007 under the supervision of senior lecturer Dr. Affan and also provided chemistry tuition for the students at the university.

The most interesting thing about Christina is that at present, she works for Pending assemblyman and Sarawak DAP Treasurer Violet Yong while still managing to work as a chemical engineer. She credits this to having two employers who are both very understanding and flexible. “I am able to fulfil both my passions at the same time, which is really a blessing,” she says with a smile.

Christina’s educational background is in the area of resource chemistry and she is currently in the process of completing her postgraduate thesis in the field of organic chemistry. However, Christina felt it was important to also work with Violet as her special assistant. “I realised that my passion was to assist the people in a day-to-day context,” she explains. “Currently, my main task is to attend to the public’s complaint as YB Violet’s assistant.”

This involves helping to write complaint letters for the public to various state departments as well as selling The Rocket at the morning market and other places. Besides this, Christina also helps to organise some of the party’s dinners which are held in Kuching. “I also assist with voters’ registration efforts which are conducted regularly at various locations,” she adds.

“Listening to the people is important as we can only help them once we have gotten to know them. Although I am still new, I try my best to fight for the people and that starts with gaining the trust of both supporters and non-supporters.”
Having joined the party in March, Christina is actually quite new to DAP but she began assisting Violet almost immediately, in April. “I am happy just to be able to help and support the party in whatever ways that I can. There is plenty for me to learn, which I am privileged to pick up through hands-on experiences as YB Violet’s assistant,” she acknowledges.

But why DAP or even politics at all? While many young people are shying away from the “dirt and grime” of the political scene, Christina sees that politics has a direct connection with everyday life, even if we do not think it does. “For instance, the Budget each year affects each of our daily spending habits and our security as a society but we just may not realise it,” she says.

She adds that nowadays, people lack interest in being politically active or even aware because of the unending rise in corruption and indifferent nature of Malaysia’s democracy. “It is not our policies which get corrupt and apathetic, but the people involved in it and the bureaucracy itself. So if I still choose to detach myself from politics, how would I know when our rights are being protected and when they are violated instead?” questions Christina.

She notes that it is not easy to get the average young person to be politically motivated, let alone to join any political party. Therefore, Christina sees social media as vital in generating more interest in politics among youth. “Facebook is one of the interesting sources of information and it gives an opportunity for the public to mingle with each other. In this way, they will automatically discuss and give some opinion about the politic issues.” 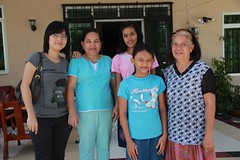 She also believes that more campaigns are needed to create a safe space for youth to discuss various issues. “The platforms available for the young to get involved in politics nowadays are very limited, especially in universities. So, promoting political awareness among educators is also very important. Young people lack the insight and tools with which to effect change because they never received a proper political education.”

Her simple answer as to why DAP over any other party is a rhetorical, “Why not?” adding, “DAP is a great party that inspires me a lot. Its sole interest is to govern by the will of the people, hear the wants of the people, and establish a peaceful and prosperous social democracy that can unite disparate races and diverse religions and cultures.

“It’s time to change. After 50 years, our government is still ruling based on race and religion. If you are as disappointed as I am, we need to change this. Unless and until we change this, I don’t see any reason why our country would be advanced.”

Citing Sarawak’s rich array of natural resources, Christina queries why the people are poor and still facing basic facilities problem. “It is due to the low pay, poor employment opportunities, a business environment which is controlled by a select few. Sarawak has been given a raw deal.

“Other than that, I wish to have a Competency, Accountability and Transparency (CAT) governance in Sarawak. By having open tender to all government procurements, our economy will no longer be controlled just by those at the top,” she reasons. With a <strong>CAT system, Christina believes that issues such as expiring land renewal leases will be unconditionally renewed. “Our people will not have to bear more burden to pay for what they already have.”

Both her parents are DAP supporters who brought Christina to DAP dinners and events since she was a little girl. Her uncle is also an active member of Bintulu DAP. Her father is a businessman, while her mother helps out with the family business. Christina has five siblings, two of which are working while the others are still schooling.

When she is not busy trying to help solve the problems faced by the public or at her other job as a chemical engineer, Christina enjoys reading books such as J. R. R. Tolkien’s Lord of The Rings as well as ghost stories. She also plays badminton with DAP members every Saturday and goes snorkelling.

She concludes that as often as it has been said, it is still true that youth are the future, “So, whether we like it or not, we are the ones who can bring about a healthier political culture in Sarawak and in Malaysia.”

This article was written by admin on Wednesday, November 3, 2010 at 3:47 pm. You can follow any responses to this entry through the RSS feed. Both comments and pings are currently closed.