Liew Chin Tong: Kit Siang is a prophet ahead of his time

Lim Kit Siang tirelessly reminds Malaysia what she could have achieved – a just and progressive democracy that celebrates diversity, respects human rights and shares resources equitably. Forty-five years ago, he set out to make that a reality for all.

In hindsight, we thank Kit Siang for without his steadfast fight of Herculean proportions Malaysia would have no opposition, no diversity, a worse human rights records and even wider gap between the haves and haves-not.

Kit Siang has always spoken out, often as the lone voice, for Malaysians who cannot or dare not speak up. He has been at the forefront of the fight for justice, good governance and equality from his very first speech in Parliament in 1971, where he led the DAP in opposing the constitutional amendments curtailing free speech in Parliament under the veiled threat of disturbance by the then UMNO Youth Chief Datuk Harun Idris.

A prophet ahead of his time, Kit Siang must have been amused, or perhaps saddened to see that -decades after his visionary pronouncement- diversity is now grudgingly recognised as Malaysia’s strengths by the promoters of “Bangsa Malaysia” and “One Malaysia,” albeit for political gain. But his was a principled fight from the onset. His conviction for a better Malaysia is derived from ideals, not mere political opportunism.

In the words of his schoolmate and scholar Michael Ong, Kit Siang is embroiled in “a game in which the goal post changes constantly”. Despite the numerous trials and tribulations, he remains stubbornly optimistic, believing that the unquenchable desire for justice is latent in the hearts of every man and woman. It is only a matter of time before people are won over.

With his principled stance and optimistic reading of human nature, Kit Siang moves the nation. Most of all, he gives hope to a people who have lost hope in the darkest of nights.

Together with everyone in DAP, I thank Kit Siang for giving us a mission bigger than ourselves – the quest to create a better Malaysia- the pursuit of which has given our lives more meaning. 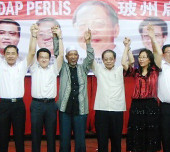 This article was written by admin on Friday, February 25, 2011 at 6:25 pm. You can follow any responses to this entry through the RSS feed. Both comments and pings are currently closed.