Much has been said about Barisan Nasional’s might in Johor. For the casual observer, the unwavering support that Johoreans especially the Malays give to BN even in times when political change spreads across the country, is baffling. The Rocket gets Johor DAP’s state vice chairman Ahmad Ton’s views on why Malay support for UMNO is steadfast and where DAP fits in. 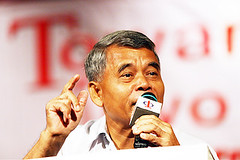 As Ahmad explains, the political tsunami of March 2008 has been long in the coming for Johor. The opposition parties which have not won any straight contest for any seats in Johor – be it at the parliamentary or state assembly level – since 1990 saw a remarkable performance in 2008. In that election, Pakatan Rakyat won six state seats and one parliamentary seat. The signs of political change are now discernible in Johor.

In regards to the unwavering level of support that the Malays give to UMNO, Ahmad mentioned that several factors are involved. Firstly, many of the religious preachers and school teachers in Johor are staunch UMNO supporters. In a captive environment such as the mosques and classrooms, it is easy to indoctrinate that loyalty to UMNO is loyalty to the government and nation.

At the village leadership level, the majority of the village chiefs are UMNO supporters or members. Village chiefs across Johor are appointed by the state government; UMNO utilises this state apparatus to disseminate its propaganda and goodies to retain the support of the Malays. In addition, the Malays through their upbringing are generally feudalistic in thinking. Questioning of authority is not commonplace.

According to Ahmad, another key factor is the low awareness of political knowledge amongst the Malays. He related how when he mentions in ceramahs that the current UMNO is not the original UMNO of 1946, there are bewildered looks amongst the Malays. Many are still ignorant of the political happenings in the country.

Ahmad also credits UMNO for its ability in regularly reshuffling its grassroots leadership in Johor. This gives the members the impression that changes are forthcoming in the party; however, it is merely superficial changes. The government is still the same and is just as corrupt.

Another worry amongst the rural Malays is the issue of land ownership. He cited the case of unresolved land ownership in Kampung Baru Plentong Tengah (KBPT) and a FELDA scheme in Masai. In the case of KBPT, the land authorities sold the land that was cleared by the original settlers without informing them or giving them the first right of ownership. Unethical land grabs, as in many states, is an imminent issue in Johor.

When asked on the low levels of support that DAP generally gets from the Malay community, Ahmad explains that the Malay community in Johor is still conservative and close-minded on certain issues. Particularly, he feels the Malays will take time to accept the fact that Malaysia needs to have a party which fights for justice for all races and upholds the one united race of Malaysians.

However, he is not discouraged. Ahmad mentions that there have been many Malays that were in this party in the past; he believes there are many more politically mature Malays who will one day join the party.[THE ROCKET]

This article was written by admin on Wednesday, January 5, 2011 at 1:40 pm. You can follow any responses to this entry through the RSS feed. Both comments and pings are currently closed.