While down south, The Rocket also caught up with Johor DAP state deputy chairman Norman Fernandez and heard his honest take on the fortunes of Pakatan Rakyat and the political scenario in Johor. 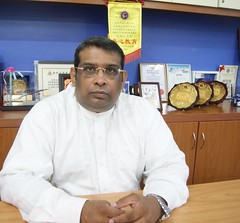 Johor which has been known as UMNO and Barisan Nasional’s stronghold, has been seeing some changes politically and mentally. In the past, many Johoreans especially the Malays have sentimental attachment towards UMNO and have grown accustomed to the one-party dominance by BN. However, after the March 2008 elections, there is an increasing awareness amongst the people that with the presence of an effective opposition, it is healthy for the governance of the state and country.

The signs of change are already visible, especially in the Malay areas. “In the past, we couldn’t even enter Malay areas and sometimes we would even be chased off. Nowadays they are willing to welcome us, listen to us and read our newsletters,” Norman remarked. It is remarkable to note the strides that DAP has made in breaking the barrier of mistrust held by the people there.

Norman however notes that the pace of change in Johoreans’ mindset, typically the older generation, is still slow. “The younger  generation do exhibit more receptiveness towards the opposition; perhaps in this segment our scope for improvement is bigger.”

Norman says that the economic issues such as rising cost of living and stagnating income levels takes  precedence amongst Johoreans.  The rising cost of living is compounded by the Singapore factor – many Singaporeans and Johoreans who work there have better income levels than the locals and they spend it in Johor, thereby driving up inflation rates.

The local governing authorities are also inefficient in their services, often  not providing satisfactory level of service for the people.  Furthermore, the elected state assemblymen (ADUN), whether BN or opposition, should be invited to attend the municipal board meetings.

Norman noted, “We don’t see this happening in Skudai or Kluang. There seems to be a concerted effort to keep the opposition ADUNS from the affairs of the local government services.” Another major concern is the rising crime rates. He attributes this to Johor’s porous borders where outsiders can commit crimes in the day and slip away to neighbouring countries unnoticed. In addition, Johor is plagued with housing issues where there is undue focus on developing high-end properties for foreigners but not enough affordable
houses for the middle and lower income groups.

Some of these issues can be attributed to the pace of uneven  development in the state. Many are unable to cope with changes that it wrought. A recent example is the Kampung Baru Plentong Tengah case. This was a settlement village established in 1980s. The settlers were promised ownership of the land; however, the land authorities sold it to a third party and evicted the settlers forcefully with paltry compensation.

Likewise, much of the land in Iskandar Malaysia which used to belong to Malay settlers was taken away from them. Norman worries that at the rate the lands in the state are taken away, there may not be any land left for the poor, especially the Malays. According to Norman, the federal government’s undue focus on Iskandar Malaysia is misplaced; it should instead focus on balanced development throughout the state.

He added that Singapore has a strong influence on Johor. “Many Johoreans watched Singaporean TV channels and work and study in
Singapore; they see good governance being practised there. And many of them are critical of the government here. Yet they don’t  seems to be influenced in wanting change as what they see happening in Singapore,” he explained.

Norman attributes this to the sense of not wanting to rock the boat as  they are comfortable with status quo. “Many Johoreans have a “permanent resident” mindset; they work in Singapore by the day or week and only return to Johor for the weekend. So local issues  are not much of a concern to them. There appears to be a weak sense of ownership of this land on their part.” 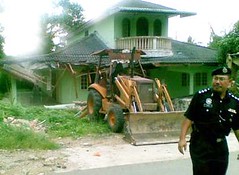 Touching on PR, Norman believes that PR is seen as a new alliance offering hope in Johor. It has made some inroads. Nonetheless, he admits that it still has a long way to go. The people are willing to vote for the opposition candidates but PR has to build and strengthen itself to progress further.

Delving further, he voiced cautiousness in his outlook of PR in Johor. PR needs to do the ground work before governing. He said Johor DAP has also not been spared of problems. “However, the 2008 election results has provided Johor DAP the impetus to change and is
currently in a revival phase.”

Touching on the broader picture, Norman says a lot of issues and policies for PR were also not clarified properly. Certain sensitive issues were not discussed openly; issues such as Islamic state and gambling were hushed. When PR leaders started bickering about them, people’s perception of PR began to be affected.

He believes PR will win more seats in the next elections. As for forming  the next state government, he said that while PR may not be ready, it is prepared to be the strongest state opposition ever. The PR component parties will need time to cooperate well. In addition, Johor is a fairly rural state; the multi-cultural appeal of PR will need to be properly explained to the rural voters before they change
their voting preference. Political change in Johor will require time.

In the past, the opposition parties were focusing on their area of strength. It also meant that each PR party has its own weakness as well. That has resulted in the opposition parties choosing to contest in the seats where it has a better chance of winning. Many of the less winnable seats were contested by the party with more resources. Norman pointed out that for the Malay community, they are  generally receptive to any politician who is more Malaysian in his outlook, speaks good Bahasa Malaysia and understands their culture.

As for the non-Malay communities, they are generally wary of the brand  of politics espoused by PAS. They see PAS as clean and honest, but they are apprehensive of the religious stance taken by certain PAS national leaders. Norman quoted the example of the  issue on whether a non-Malay can become a Deputy Prime Minister that was brought up by the PAS Youth Chief Nasruddin Hassan Tantawi and his “religious” rationale opposing it. He believes this is one of the divisive issues that can turn off the voters.

He further elaborated on PAS’s tendency to preach strict religious and moral values to the people. There exists a latent fear in the minds of the non-Malays that once PAS takes power, there will be a drastic change to the rules and regulations of the state and country. However, as for Johor, he thinks PAS leaders are generally more multi-cultural and cooperative. (Norman was Johor PAS’s legal advisors for many years.)

Touching on PKR, he thinks they are in the reorganisation phase. He cautions them of the danger of falling into the trap of thinking that they are the “big brother” to Pakatan partners which can be easily manipulated by Umno and BN.

The Road Ahead for DAP

Regarding the future for DAP, Norman noted that Johor DAP is making a conscious effort to be more multi-racial and inclusive. “In the past, we have had experiences with some Johor DAP branches conducting fundraising dinner with Malays attending and non-halal food being served. Now we make sure we pay attention to these details such as food that is suitable for Muslims and Hindus,” Norman explained.

He added that Penang and Selangor PR state governments are seen as the showcases of PR’s capabilities in ushering in a fairer, more equitable and just governance for the people. Therefore, they have to be seen as doing better compared to BN. Norman concludes that DAP has always been seen as a party with principles. He feels the national leaders have to set the agenda clearly and not waver on party principles or be seen as selling out on them.[THE ROCKET]

This article was written by admin on Wednesday, January 5, 2011 at 1:36 pm. You can follow any responses to this entry through the RSS feed. Both comments and pings are currently closed.